Skip to content
Our bodies continually produce cells to help us grow, replace dead cells, or heal damaged cells. Normally, cells grow and multiply in a sequence. However, damaged genes can develop abnormally. They can develop into masses called tumors. Tumors can be benign (non-cancerous) or malignant (cancerous). Benign tumors do not invade the body’s organs and surrounding tissues.
While the melanoma will develop, it may be confined to the original area. If these cells are left untreated or treated, they can invade beyond the original range and invade surrounding tissue, becoming invasive (metastatic) cancer.

A 2016 Cochrane Review meta-analysis of 257 studies and 5 RCT studies (human, randomized, double-blind, controlled trial) performed on 373 patient subjects. Results showed that patients using betaglucan, triterpen – Ganoderma are 1.27 times more likely to respond to chemotherapy or radiation (27%) compared to chemotherapy and radiation therapy alone.
This treatment response assessment was based on Who’s Response Criteria, which was used as the standard method for assessing tumor response to treatment. Evaluation depends on tumor size measurement, the change in tumor size after treatment is estimated from two-dimensional measurements. In addition, the analysis also used additional criteria for assessment of response in solid tumors (RECIST). 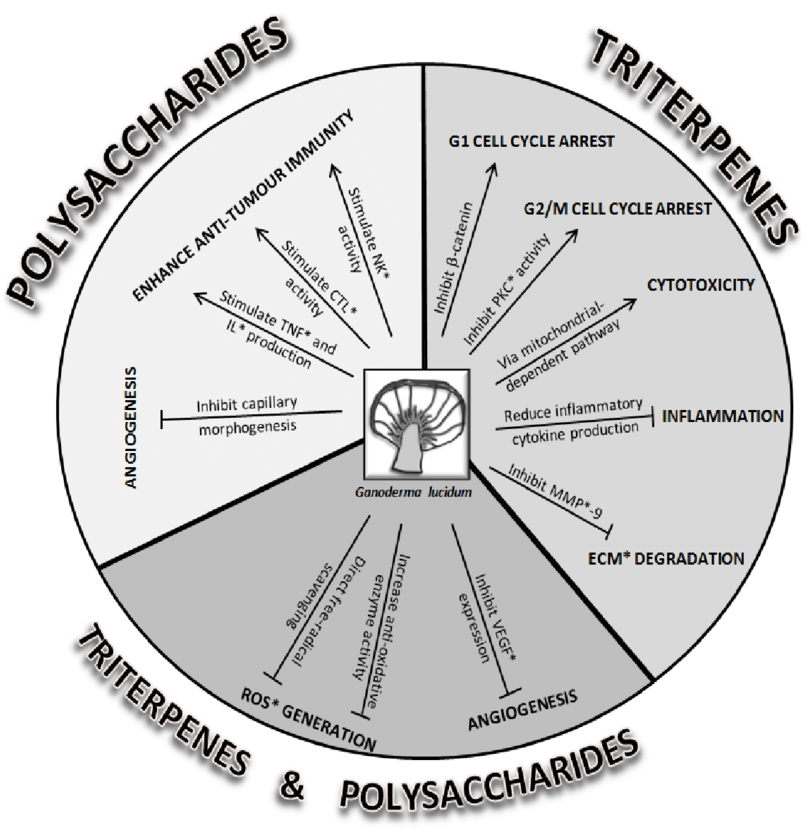 Betaglucan – Ganoderma lucidum has been shown to enhance immune response by stimulating the production of macrophages, NK cells and T lymphocytes. Like triterpenes, betaglucan can act as an antioxidant by reducing Oxidative damage caused by ROS and prevents DNA strand breakage. Betaglucan – Ganoderma lucidum also prevents tumor angiogenesis by reducing the proliferation of HUVEC and by inhibiting the secretion of vascular factors such as VEGF and TGF-β1.

The most optimal benefit for cancer patients is Betaglucan Triterpene 1-2 days before chemotherapy.